One more for luck - Equilibrium

One more for luck 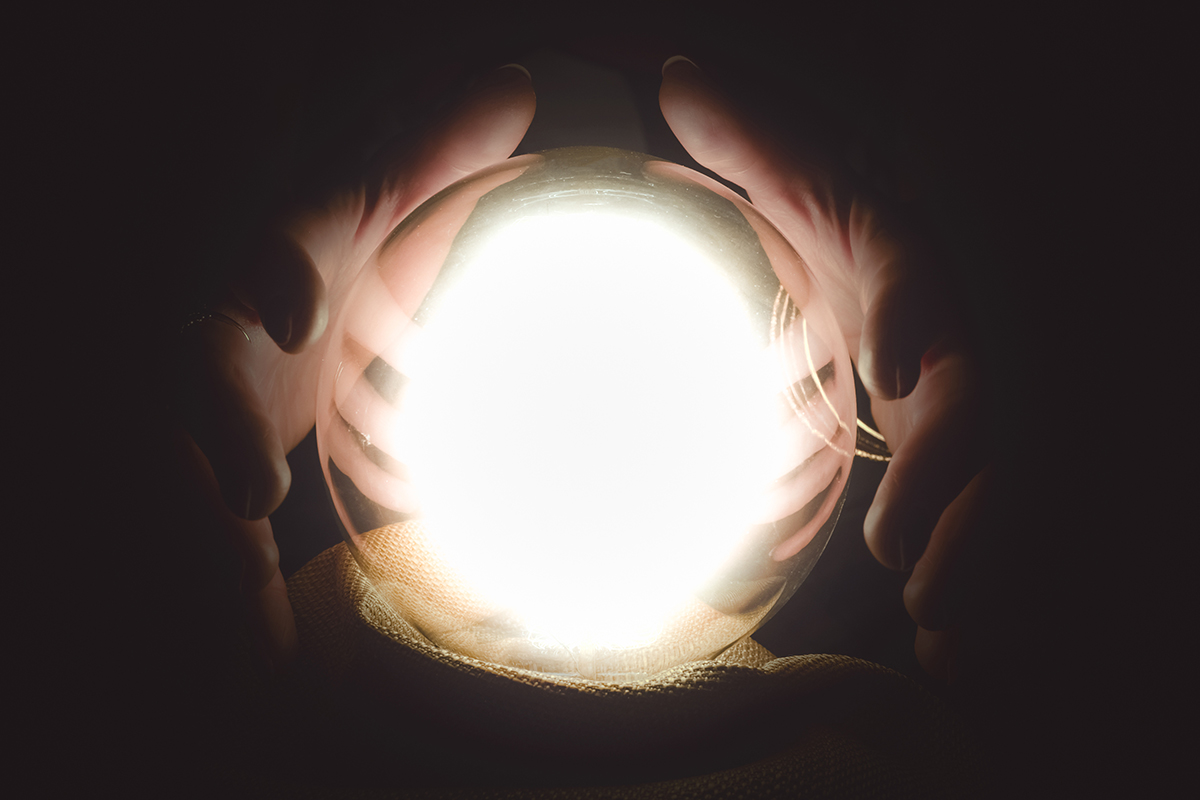 As is tradition at this time of the year, the investment bank strategists peer into their crystal balls and forecast what will happen over the next 12 months.

As is tradition at this time of the year, the investment bank strategists peer into their crystal balls and forecast what will happen over the next 12 months.

As we know, most of this is pure bunkum.  An economist might have a reasonable guesstimate of market levels in 12 months’ time but the chance that he or she is correct will very largely be dictated by luck.

To illustrate this, let’s take a sneaky look back to this time last year and see what the great and the good of Wall Street thought the level of the S&P 500 Index would be by the end of 2018:- 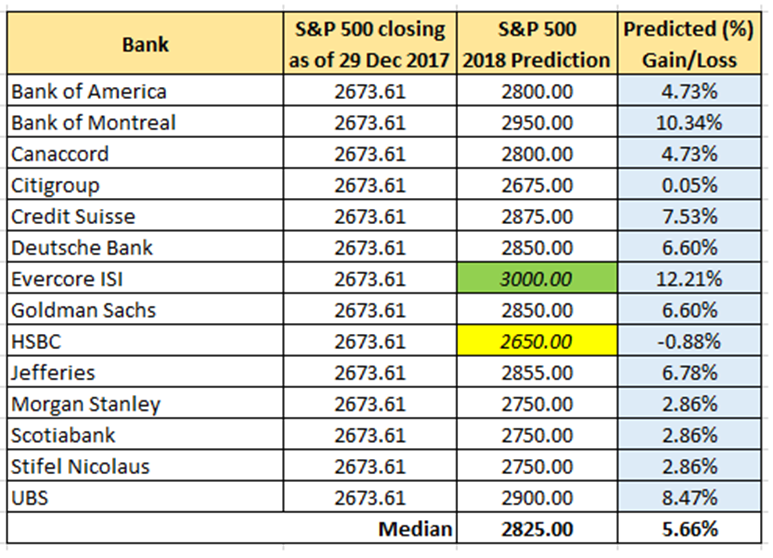 From Table One, you can see there is a decent range of forecasts for the closing level of the Index from 2,650 to 3,000.  The only problem for these forecasters is that the market is barely even within this range – it is currently 2,651 at the time of writing – and so there is every chance there may be egg on many faces by year end.

Not to worry, what about the winners of last year’s competition – who correctly forecasted the Index for the end of 2017?  Perhaps they are winning this year too and we have spotted a star forecaster?  Well, interestingly, they were UBS, Credit Suisse and Goldman Sachs which are all looking to be some of the least accurate this year.  Sadly, no shining stars.

We would treat these forecasts with a high degree of scepticism – at the end of 2007 this group of forecasters predicted the Index would rise between 3% and 18% in 2008 and we all know what happened then.

Despite ascribing the investment banks’ success or failures down to luck, the truth is that investment returns invariably involves a significant degree of both.

To some extent we agree with Bruce Springsteen when he sang, “When it comes to luck, you make your own”.

In the investment world, there are funds or fund managers that can persist in performance for longer than pure chance models would expect.

Theoretical models indicate that persistent outperformance of a benchmark ceases after a few years but in the real world some continues for many more years.  We try to ensure we can capture this persistency with detailed due diligence, low turnover and avoid the temptation to sell during short periods of weak performance.

On the flip-side of this is the recognition that returns do revert to the long-term averages over time.  Believing and investing in stocks, funds or assets that continue to go up, up and still higher (whether these are houses, Amazon or Bitcoin) is often in denial of this.

Whilst you may or may not be lucky with the timing of your exit from these investments, you can create your own luck by recognising the circumstances and divest accordingly.

For example, over the last year or so, we have reduced the equity exposure in the portfolios as markets continued to rise.

We were never going to time it exactly right and we admit we were possibly too early to reduce the allocation to equities.  That said, we did not want to leave it to luck that the equity markets would continue to to the point of over-valuation.  Recently, we have reversed some of this equity underweight and bought into recent stockmarket weakness.

I have read two books recently (both highly recommended) that feature two separate individuals that appeared to be skilled but eventually were found out to simply be frauds with large doses of luck.

The first was Bad Blood (John Carreyrou, 2018) which documents the rise and ultimate demise of Theranos, a company that promised to quickly give you a complete picture of your health using only a pinprick of blood. Elizabeth Holmes founded it when she was just 19 years old, and both she and Theranos quickly became the darlings of Silicon Valley.

Luckily for them, they were operating in a semi-regulated sector and bolstered their appearance of skill and professionalism by associating with influential and famous people.  At one point the stockmarket valued the company at $10bn, today it is worthless.

The Theranos scandal has strong parallels with I other book I recently read called Billion Dollar Whale (Bradley Hope and Tom Wright, 2018*).  Here, an individual managed to finagle himself into a position to be able to set up a sovereign wealth fund in Malaysia and thereby siphon off very large sums for himself.

He legitimised the money by bouncing it around the world in various accounts and, similarly, associated with the rich and famous in both Wall Street and Hollywood.  He used some of the money to produce the film “Wolf of Wall Street”.   Oh, the irony.

When the luck runs out

Ultimately, both are cautionary tales about the virtues of celebrity and the deception of luck as skill.  Sixteenth century Italian philosopher Giordano Bruno once said, “With luck on your side, you can do without brains”.

Maybe, but both the subjects of both these books are now facing serious criminal charges.  Perhaps it was appropriate that the other film they made was “Dumb and Dumber To”.

With these salutary tales in mind, let’s hope for good fortune (and skill!) in the future.  It only leaves us to wish all our clients a Happy Christmas and the very best of luck for a prosperous and healthy 2019.

Disclaimer: The content contained in this blog represents the opinions of Equilibrium Investment Management. The value of your investments can fall as well as rise and are not guaranteed. Investors may not get back the amount originally invested. The commentary in this blog in no way constitutes a solicitation of investment advice. It should not be relied upon in making investment decisions and is intended solely for the entertainment of the reader.

*Prevented by injunction from being sold in the UK, if you want a copy Amazon.com will ship one to you