Over the past few days, stock markets have reacted violently to concerns over the Coronavirus.

By comparison, our balanced portfolio has fallen 1.72% over the same period (Source: FE Analytics).
Investors are now worried about the increase in cases of the virus outside of China. In particular, there are hotspots in Italy, Japan, Korea and Iran. There has also been an outbreak in a Tenerife hotel where many British holidaymakers are staying.

As discussed in our recent newsletter, we have no way of knowing how this will pan out. However, it is likely that the economic impact will be more significant than investors had thought a week ago, given the wider spread and the ‘shut down’ in parts of Italy and elsewhere.

From a market point of view, shares in airlines and other holiday firms have been hit particularly hard. Tourism contributed nearly $9tn to the global economy in 2018, and it is a significant part of the French and Italian economies, which are now very likely to see a recession.

The risk of a global recession has also risen, but for now, we still think this is most likely to be avoided. We will continue to monitor things carefully and will react accordingly.

It is worth pointing out that the number of new cases in China continues to drop, even as new cases are rising outside China as shown in chart one below.
Chart one: 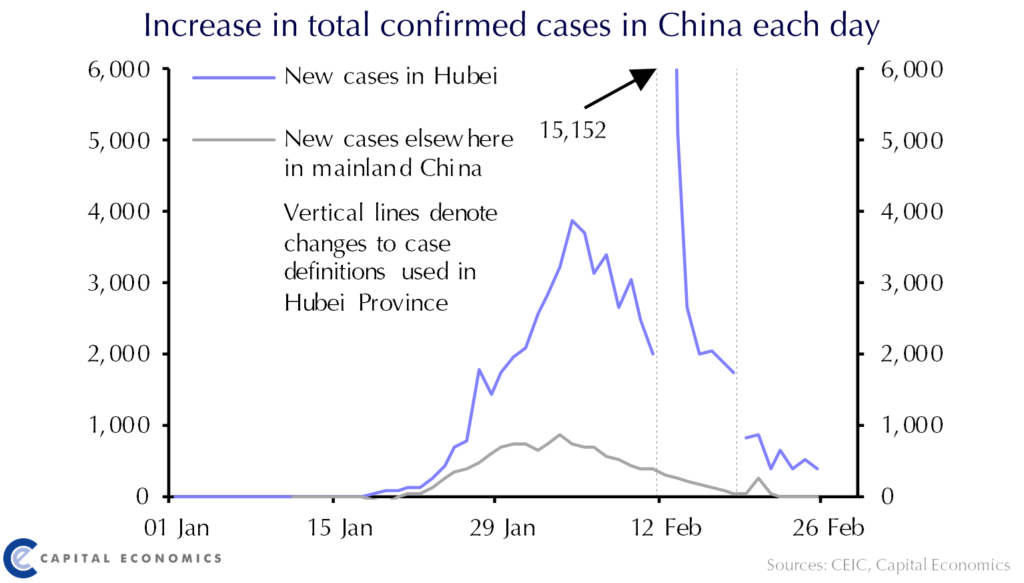 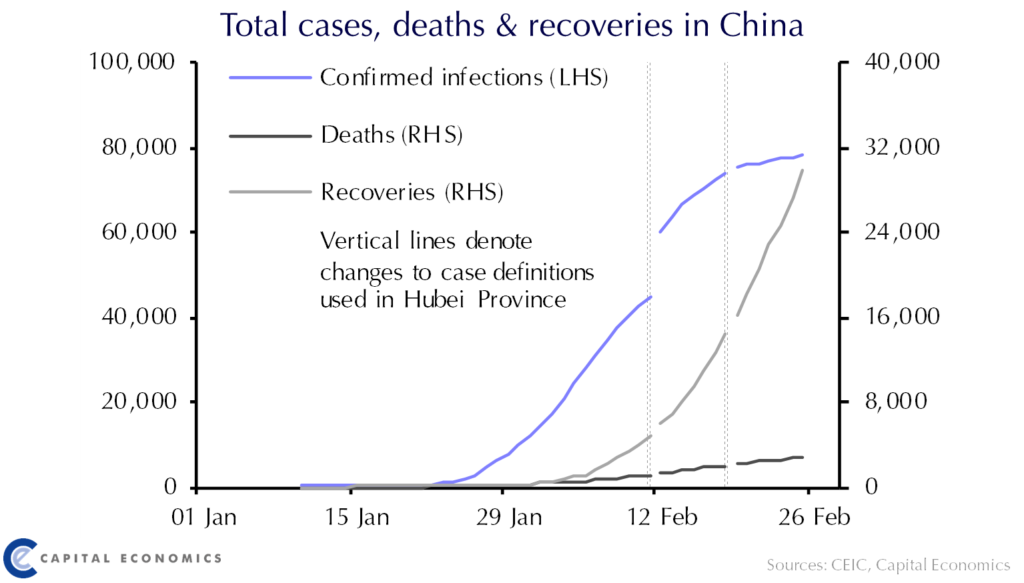 What action are we taking?

For now, we are viewing the market volatility as a buying opportunity.

As Warren Buffett said this week, investors should not “buy or sell your business based on today’s headlines.”
He said, “If it (volatility) gives you a chance to buy something you like and you can buy it even cheaper, you’re in good luck,” and added that “you can’t predict the market by reading the daily newspaper.”

At present, the spread of the virus does not fundamentally change our views on equities. In certain sectors and countries, company revenues may be hit and therefore underlying profits will probably not grow as much this year as perhaps investors have expected. However, we still are working on the basis that this is likely to be a temporary hit to the global economy which may recover later in the year along with company profits.
When the FTSE 100 hit our trigger point of 7,150 we carried out one of our volatility trades, buying between 2% and 5% into an index tracking fund (depending on the portfolio). We will aim to sell this again should we recover to around 7,500 or so.

We also struck a new defined returns product for most portfolios on 25 February, for around 1.5% of portfolios. This is with BNP Paribas and is based on both the FTSE 100 and the S&P 500. The indices were at 7,017 and 3,128 respectively at close on 25 February. Should they be at or above these levels in 12 months’ time, the product will pay a 14.95% total return.

It is worth pointing out that not everything has fallen. Our property and fixed interest funds have generally continued to go up, for example, meaning we have assets we can sell at a profit in order to buy into equities at relative lows.

Our next trigger point is at 6,750, at which time we will look to carry out another volatility trade.
However, we are always willing to change our minds as the facts change. We will keep this strategy under review and will change to a more defensive approach if we think it is appropriate to do so.
For now, we need to take a long-term view, and we think that over the next 18 months markets are much likely to be higher than they are lower.

The content of this email represents Equilibrium’s collective views and in no way constitutes a solicitation of investment advice. Past performance is not a guide to future returns. The value of your investments can fall as well as rise and are not guaranteed. Investors may not get back the amount originally invested.