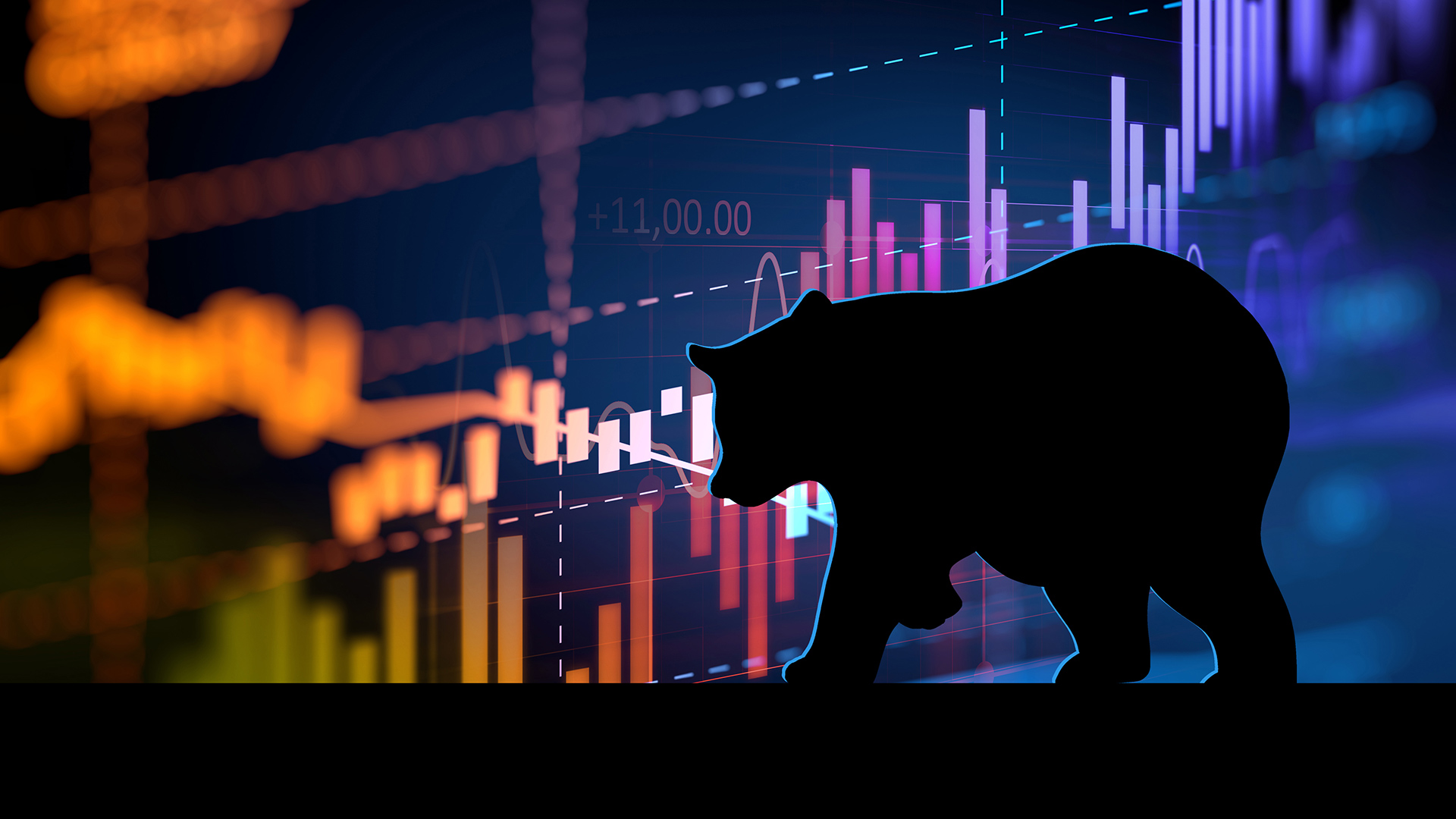 It’s been a pretty brutal time for investors so far this year with weak markets.

Since the start of the year, the US stock market has fallen over 22%, a ‘bear market’ as it is known. For reference, there have only been 14 such bear markets since 1947. This sounds rare, but another way of looking at it is to say that they tend to happen on average roughly every 5.3 years. (Source: Investopedia).

Chart one shows what has historically happened to the US market over various time periods, following a 20%+ fall. Over the subsequent 12 months, the US market has returned positive returns three quarters of the time, with a median return of 23.9%. 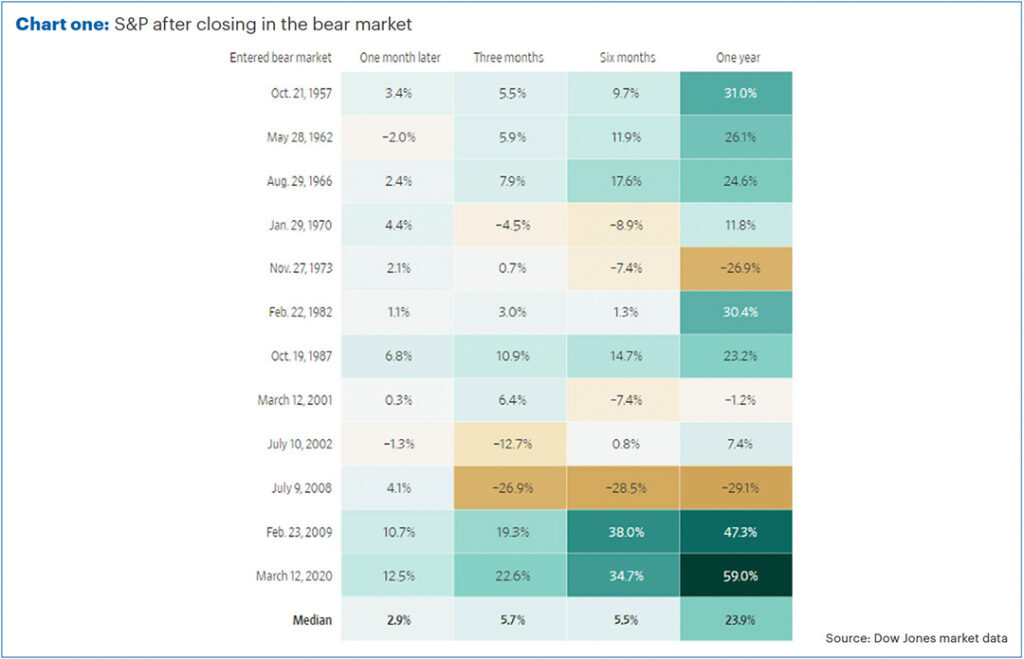 It’s important to remember that such falls are not unusual and markets tend to recover fairly quickly.

That doesn’t make them any more pleasant to experience of course.

Some stocks have fared worse than others, with energy companies generally doing well and technology companies very weak. For example, Netflix is down an astonishing 70% so far this year, after subscriber growth reduced following the re-opening of economies after Covid.

In fact, between them, Apple, Amazon, Microsoft, Facebook and Google have lost around $2.7 trillion in market value since the start of the year, roughly the gross domestic product (GDP) of the United Kingdom. Ouch.

The pain has not stopped at technology shares.

Chart two from asset manager, Ruffer, shows the returns you could have earned across global stocks and bonds if you had had a crystal ball and could have picked the best place to be invested each quarter.

This ‘perfect hindsight’ investing means that over the decade to the end of 2021, you would have received a 35x return on your original investment.

However, in the first quarter of this year, they highlight that the best-case scenario for stock and bond investors was a -4.5% return from high yield bonds. Everything else was worse and that’s before adjusting for the 7% inflation ravaging your capital.

Most equity and bond markets have fallen further since then, whilst inflation has moved even higher.

There has been nowhere to hide.  The last time this happened was 1990.

Table one brings things a bit more up to date and looks at a few different asset classes up to 10 June (when we produced the information for our recent investment committee).

As discussed in previous editions of the Pulse, the FTSE 100 has done better than most markets due to its high weighting to oil and gas. Most other markets are down significantly, with even so-called ‘safe’ assets like corporate bonds and gilts making double digit falls.

By contrast our balanced portfolio was ‘only’ down 6.28% over this same period. Returns were helped by our allocation to alternative equity and in particular to infrastructure investments, which had the rare distinction of making a profit so far in 2022.

In our last ‘The Pulse’, we ran through some of the key causes of this marked weakness, driven by the trifecta of rising inflation, slowing growth, and increasing interest rates.

We feel that it’s highly unlikely all three of these factors will happen at the same time, despite market nervousness. Our belief is if inflation remains high, it will slow the economy, but this would likely mean rates would be cut (or not increased so fast).

That said, certain combinations of these three factors can still inflict more misery on markets, or conversely, could be the recipe for recovery.

So, how do we think this will pan-out in the near future?

Table two shows four potential scenarios we have mapped out and what this would mean in terms of the assets that would do well or ones to avoid. 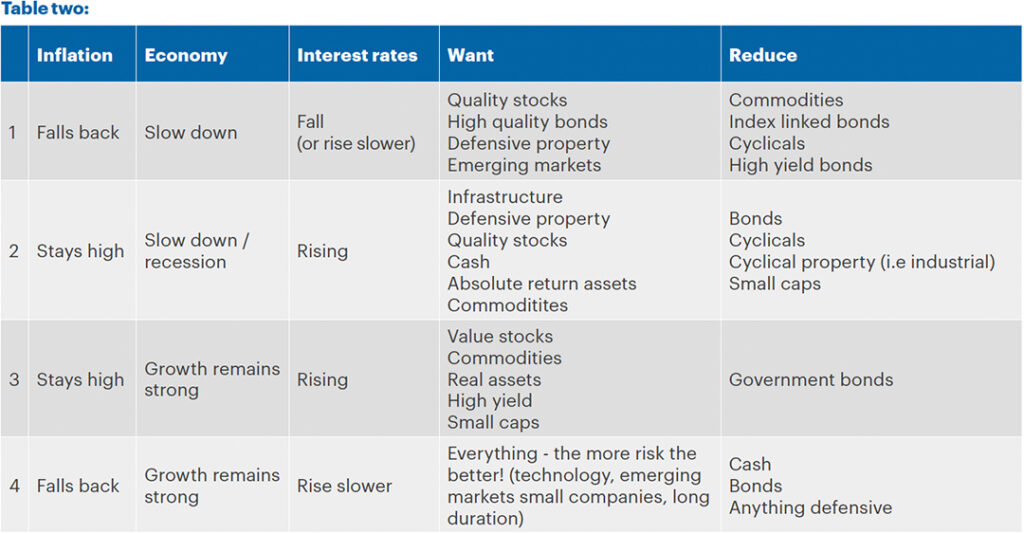 Markets are currently poised for scenario 2. Many investors believe inflation will remain elevated, central banks will continue ratcheting up interest rates and this will end in a sharp recession.

We believe scenario 1 is the most likely. This paints a picture of weaker inflation leading to a slower pace of interest rate rises than currently expected, resulting in a ‘soft landing’ of a relatively mild recession. As a result, we have topped up both bonds and other interest-rate sensitive growth areas, such as technology stocks. In most portfolios we have purchased a Nasdaq 100 index tracker after the index fell around 30% from peak.

However, we are also ‘hedging’ against scenario 2 by increasing exposure to real assets like property, and absolute return funds, particularly those which target inflation plus returns.

Inflationary pressures are high but driven mainly by energy and housing costs. Any softening of these factors would be positive.

What goes up must come down

We are not oil price experts but mathematically, in order to have the same impact in the next year on inflation, oil will have to rise to around $200/barrel in 12 months’ time. The oil price reached its all-time historic high of $148/barrel in July 2008 and so this is possible, but the odds are stacked against it.

As reported, the cost of filling the average tank of petrol in the UK is now over £100 and it is this type of price pressure that usually leads to a fall in demand and eventually a reversion to longer term average prices for commodities like oil.

Similarly, housing, which accounts for around a third of the inflation index, is likely to see notable weakness given the rapidly rising mortgage rates.

Secondly, unemployment is very low. Yes, we know this is a lagging economic indicator – firms generally lay people off as recession bites, not ahead of it.

That’s a lot of people in work and bear in mind that household spending is the largest element of the economy, making up 55% of European GDP, 60% of the UK’s GDP and 70% in the US.

In past decades, this tight labour market would have led to the workforce demanding much higher wages and thereby further pushing up inflation. These wage pressures have been much weaker in this cycle, possibly because of lower unionisation of the workforce, especially in the private sector. Of course, there are exceptions where union presence is still strong, take for example, the rail worker’s current strike over a pay freeze.

What this does mean, however, is that real wages (wages adjusted for inflation) will hit consumers and they can be expected to rein in their expenditure. Sadly, these days you cannot hear “cost of living” being mentioned without “crisis” in the same sentence.

However, in some ways this has a ‘self-correcting’ effect on inflation, as reduced demand for goods and services means their prices are likely to fall (even if energy prices remain wildly unpredictable).

Markets will also take solace from this scenario. It would set the scene for fewer interest rate rises. Growth assets such as shares and some bonds which have been heavily sold down, will also have scope to perform well.

Chart three, provided by Goldman Sachs, shows that shares and bonds can provide decent returns in periods when inflation is relatively high but falling (far left bars), compared to the current weak market conditions during high and rising inflation (circled in red).

What if we are wrong? How serious would this misjudgement be?

If we jump back to Table two, look at the assets we favour under our central scenario 1. Weighting the portfolio towards quality companies (generally with more resilient profits and low indebtedness) and bonds issued by highly rated companies and governments, will serve us relatively well if the economy tips into a nasty recession, although admittedly not as much as holding just cash.

Within the portfolios, we have been building positions in US and UK government bonds into the weak prices. Holdings in quality companies have been bolstered through Morgan Stanley Global Brands and Royal London Global Select funds.

In addition, recognising the lower valuations and potential for the scenario 4-type economic recovery, we have initiated small positions in the technology-laden NASDAQ Index that has been heavily sold in recent months.

Hopefully this gives a flavour of our thinking in terms of the way forward. Clearly, we remain open-minded and are not betting the portfolios on this one outcome. Given the falls in the markets we have seen so far and the likelihood that central bankers are not going to continually raise interest rates and drive the economies into a deep recession, we think the odds are stacked in our favour.

Past performance is for illustrative purposes only and cannot be guaranteed to apply in the future.

This blog is intended as an information piece and does not constitute a solicitation of investment advice. 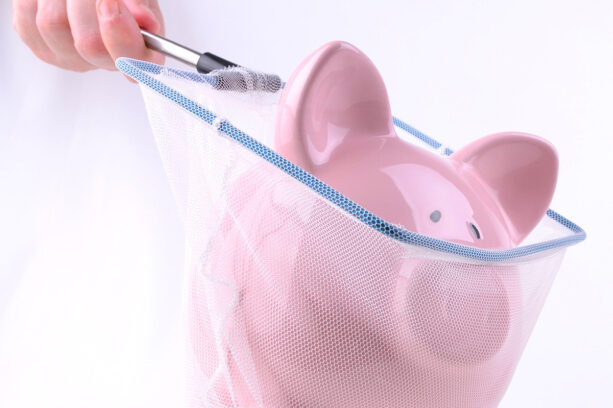 Under The Bonnet – Defined Returns – where’s the catch?

In this month’s ‘Under the Bonnet’ series, Investment Analyst, Neal Foundly, provides his take on the money-back protection offered by defined return investments, but how exactly do they work? 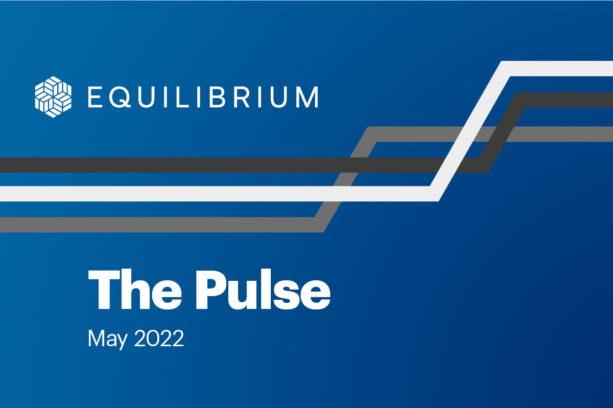 This month, Investment Manager, Mike Deverell, looks beyond the current pessimism in today’s news and instead finds more reasons to be cheerful.