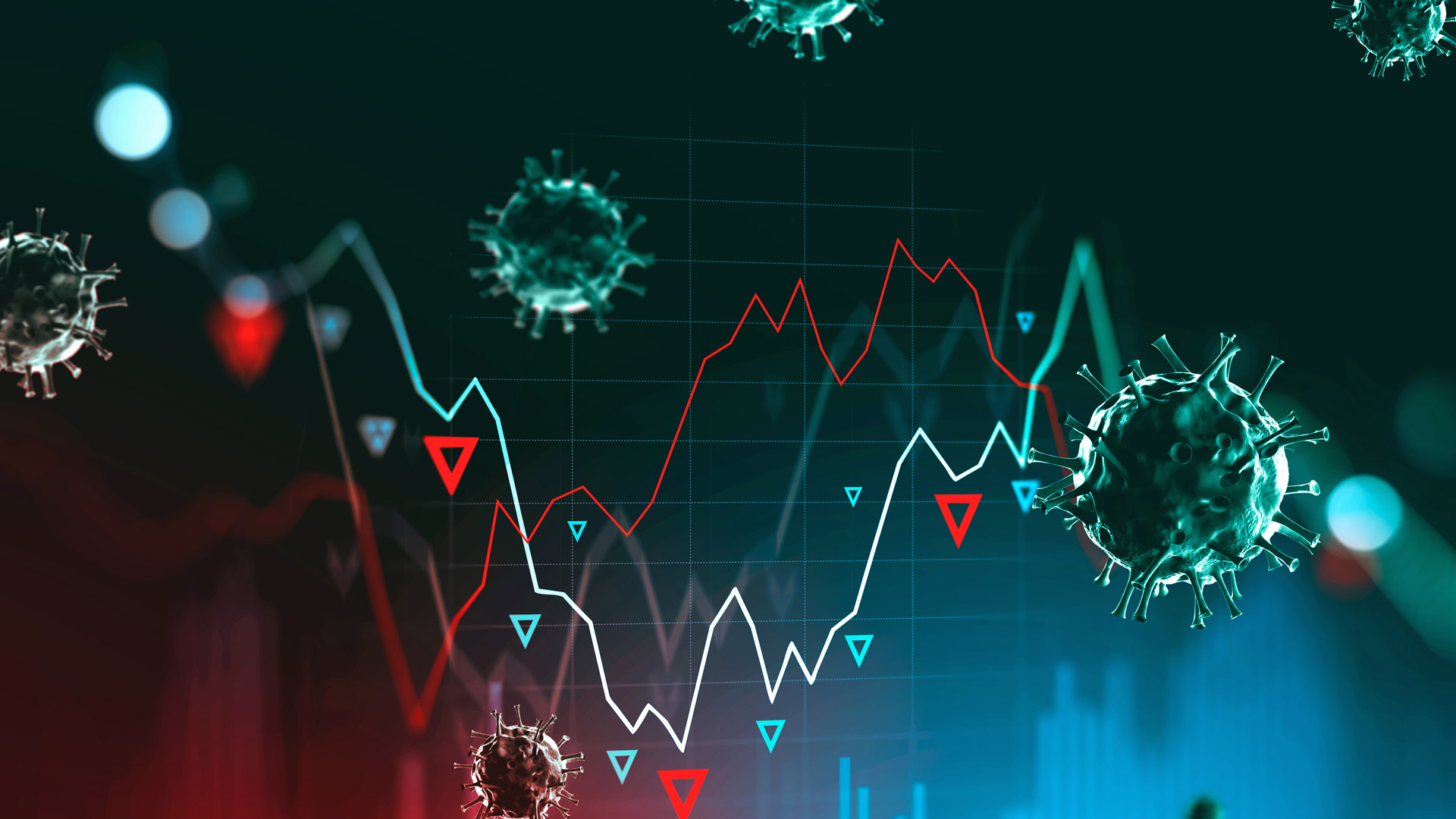 This month’s investment news comes under a slightly new identity. We are excited to tell you that we have rebranded our monthly Investment newsletter and Market Update video as ‘The Pulse’. Don’t worry, the content won’t change, however we wanted the title to reflect our responsive insights to the latest world news.

Markets have been very volatile since the emergence of the new Omicron variant of Covid-19.

However, after falling sharply when the variant first emerged, equities have in the main, made back their lost ground and recovered most of the way back to previous levels.

At present, it’s early to draw conclusions and any data on the variant is only preliminary. However, we are starting to get more information with the recent technical briefing from the UK  Health Security Agency (UKHSA) providing some interesting (preliminary) analysis. 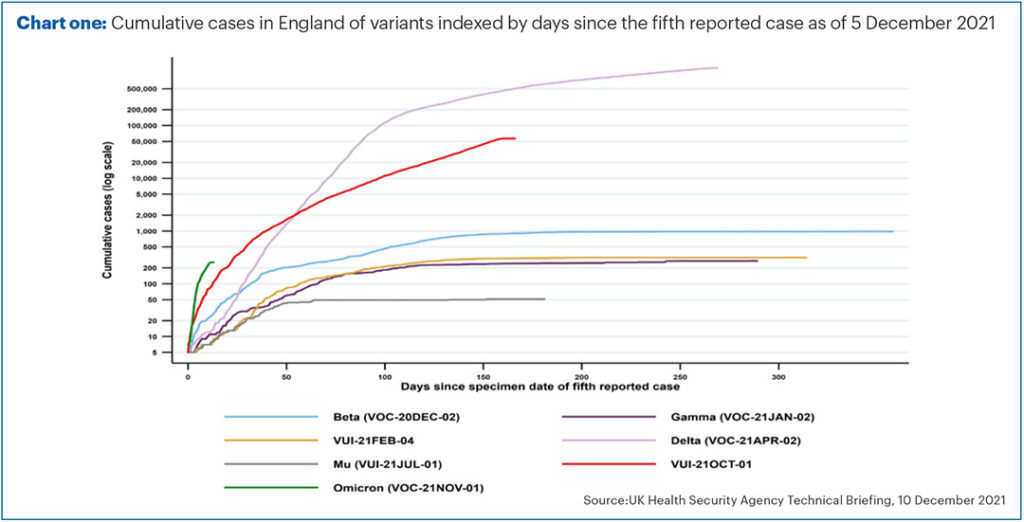 The report attempted to put into figures how well existing vaccines work against the new variant. They conclude that two doses of the Pfizer vaccine may give around 30% protection and  two doses of AstraZeneca give little to no protection against symptomatic infection (although it’s possible it protects against more serious illness).

More hearteningly however, getting a booster dose makes a significant difference, increasing efficacy to a positive 70% to 75% (estimated). As of 12 December, over 23 million booster  doses have been administered in the UK, and the government aims to offer all adults a booster by the end of December.

Data from South Africa at present seems to show very few hospitalisations. However, we should be wary about thinking this is a milder version of the disease given South Africa has a relatively young population, and because of the lag effect where people don’t tend to get seriously ill immediately.

Overall, this is a mixed picture. The data supports the introduction of new measures such as mask wearing and more working from home. We would not be surprised to see more  restrictions introduced but at present believe further lockdowns look unlikely.

From an economic point of view, there appears to already be a mild impact on growth. The Office of National Statistics (ONS) tracks all sorts of “real time” data which may give some idea  0f economic trajectory.

One such data point is restaurant bookings (tracked using the Open Table app), which has seen falls of 5%and 6% in the past two weeks, respectively. This backs up anecdotal evidence of companies cancelling Christmas parties etc. At present, the data points to a slowing of the economy rather than anything more serious. As such, we do not believe it makes sense to be making substantial changes to portfolios, such as major reductions in equity holdings.

We have however, taken some profits on holdings which have recovered well recently.

Not all investments are created equal

What happens with Omicron will have a significant impact but at present we just do not know enough to make any firm judgements.

We do know that not all investments are created equal. Stocks in airlines, oil companies and leisure could be amongst those hardest hit should further restrictions ensue.

However, as we discussed in our recent bulletin, we also believe that the uncertainty may make central banks decide to hold off on any interest rate increases for the time being. They would not want to put up rates at a time the economy needs further support.

Meanwhile, commodity prices in general, and in particular oil, have seen sharp falls in price. This helps reduce some of the inflationary pressures which have been building. These  changes in dynamic could help support bond markets.

In addition, the so-called “working from home” stocks could benefit from this uncertainty. In fact, it is arguable that this is one of the reasons why the US stock market has done so much  better than other markets.

Size is not everything

We are often asked why our equity portfolios do something vastly different to a typical global equity index. Most indices are “market cap” weighted, which means they allocate to different stocks in accordance with their size.

Such indices put the most money in the biggest company, the second most in the second large company and so on. The largest companies in the world are all American (MSCI), which  means that the MSCI World Index (for example) now allocates 69% of its portfolio to the US.

From a risk perspective, you would never be able to persuade us that 69% in a single stock market is the right thing to do! We believe in diversification across different asset classes and regions.

In fact, we actively try to put money into small companies rather than just large ones, since these tend to grow more quickly over the very long-term. More than just being concentrated in  one region, these indices are often concentrated in a small number of stocks, in particular those tech stocks who benefit from the working from home trends. Interestingly, recent data  from S&P Global Markets shows just how much of an influence such stocks have.

Chart two shows the return of the Nasdaq index in 2021 in blue. The Nasdaq is even more concentrated in the big tech stocks than MSCI World or the main US index, the S&P 500.

This index has done very well this year. However, if you bought all the stocks in the Nasdaq except the top 5 (Apple, Microsoft, Amazon, Tesla and Nvidia), your return would be the yellow line – you would have lost a lot of money. In other words, all the return of the market is coming from a very small number of stocks.

This lack of market “breadth” worries us. It only takes a small turnaround in trends and the entire US market could fall sharply. We do have exposure to so-called “working from home”  stocks as well as other tech stocks we think will produce long-term growth. However, we tend to have many more holdings, each a smaller size than such indices. We think diversification  is extremely important in terms of risk and long-term returns, but in the short term it makes it hard to keep up with the US market.

Should Omicron fears subside, we would expect that smaller companies will again outperform large, and emerging markets may outperform established. The “working from home” stocks may even underperform!

As always, we try to retain  a balance so that either outcome should not have too much of an impact.

We’d like to take this opportunity to wish all our friends and clients a very merry Christmas and a fantastic New Year. 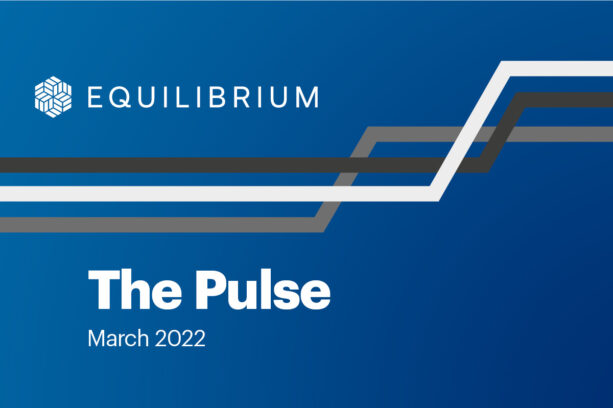 In this latest series of The Pulse, our Investment Manager, Mike Deverell, once again remains calm and level-headed amidst the current ‘investment’ storm.