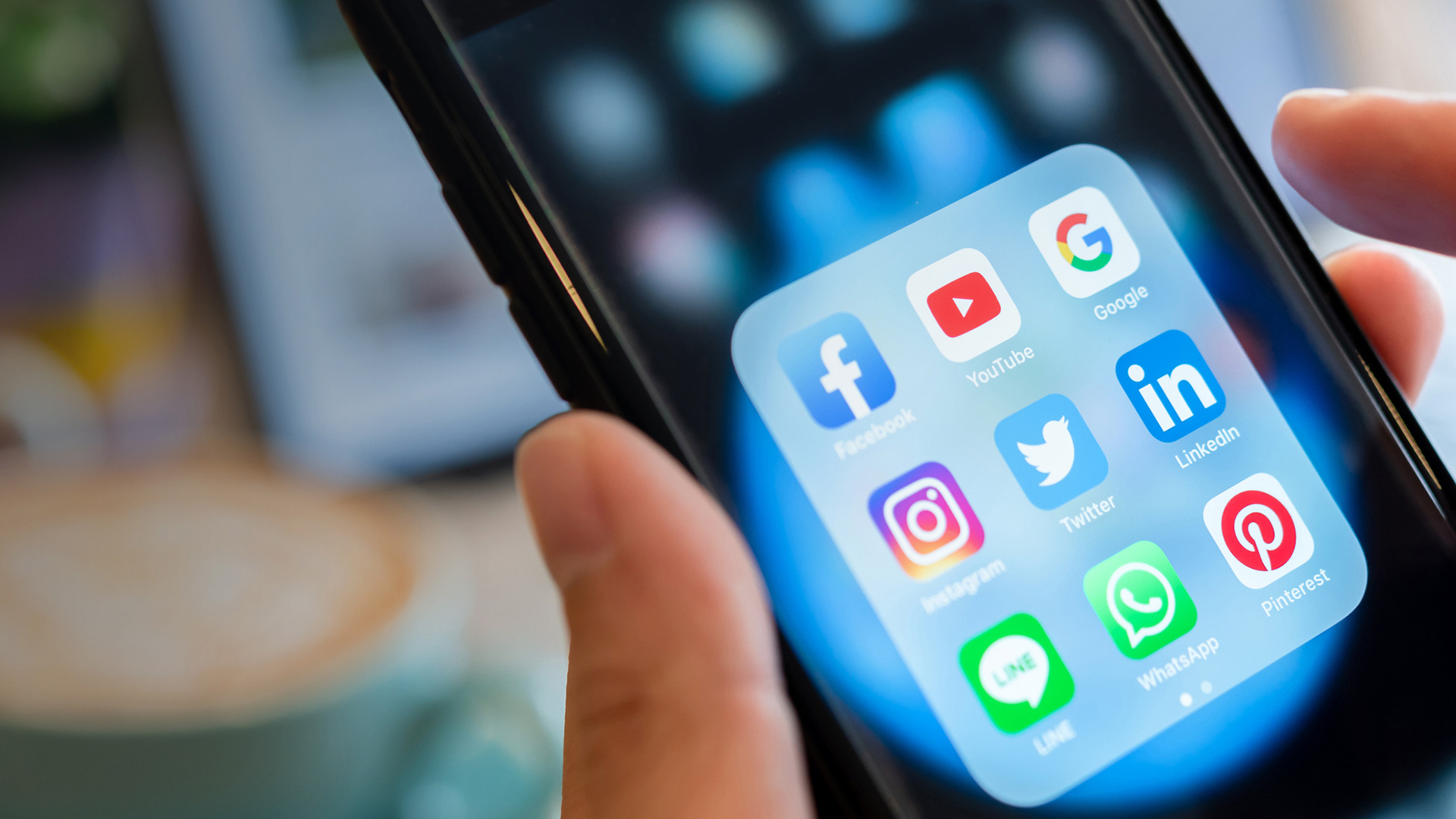 In this month’s newsletter, Investment Manager Mike Deverell explores the impact and future of big-tech.

A lack of trust?

Since the beginning of the pandemic, the big technology companies have gone from strength to strength.

Equally, I’m sure Netflix are very happy that we’ve had more time to watch television, and Apple and Google are pleased with the increased sales in their app stores.

Of course, the big tech stocks were playing an increasingly dominant part in our lives even prior to the pandemic. However, there are those who believe that this dominance isn’t healthy, both from the influence that these companies have on society and the way they potentially stifle competition.

Recently, the Federal Trade Commission (FTC) in the US sued Facebook for breaches of so-called “anti-trust” legislation. The FTC alleged that Facebook systematically tried to eliminate threats to its dominant position through the purchases of Instagram and WhatsApp.

A US court dismissed this initial motion saying that the FTC had failed to prove Facebook operated a monopoly.

However, the FTC are likely to try again, as well as launching action against other tech firms, after appointing a noted critic of big-tech as its new Chair.

As well as complaints about their monopoly position, there are increasing concerns about how social media might influence all manner of things including the outcome of elections. Many people have concerns about what they do with our data.

Investors in such big tech companies must accept the risk that such firms could be fined, their activities curtailed through legislation or, in extreme circumstances, be broken up.

It is not just in the West where the authorities are concerned about the dominance of big-tech.

In the US or Europe, new legislation can take months or years to introduce, courts will decide the outcome and (as in the recent Facebook case), the courts may side with the companies.

Meanwhile, in China the authorities can simply make a decision and it is implemented almost overnight!

Recently, China has begun a crackdown on areas where it thinks private companies have an undue influence over its society. A recent target was the education sector where private tutoring has been big business.

However, the authorities apparently feel it should be the role of the state to educate its children, and ensure they grow up with the “correct” set of values! They have essentially outlawed the ability to make a profit from education, and effectively nationalised private schools. Certain companies have become worthless overnight.

The second target is China’s own big tech firms. Just as in the West, a handful of large firms dominate areas such as social media and online retail.

Over 1.1 billion people actively use the WeChat social media app operated by Tencent, while Alibaba dominates online retail in China in a similar way to how Amazon does here. What sets them apart from their Western counterparts is that two firms also have a very dominant position in digital payments.

In 2018, over 83% of all payments were made via mobile payments (according to data from Daxue Consulting). By far the two most dominant players in this area are WeChat pay (from Tencent) and Alipay (founded by Jack Ma of Alibaba but owned by a separate company, Ant Financial). In essence, the two firms act as the Visa and Mastercard of China on top of all their other interests.

Late last year, the planned initial public offering (IPO) of Ant Financial – which would have been the largest IPO ever – was pulled at the last minute after intervention from the Chinese authorities. This was widely seen as them trying to curtail some of Jack Ma’s power (who hasn’t always been complimentary about Chinese authorities!).

Since then, Alibaba has been fined in April for anti- competitive practices. In July, Didi (essentially a Chinese version of Uber) found its app pulled from stores after apparently abusing their monopoly position, just days after the company was listed in New York. Even WeChat disappeared from app stores briefly as the Tencent had to update it to reflect new regulations.

In essence, China shares many of the same concerns that Western authorities do over big-tech, but with additional worries about Western ownership and therefore influence on such firms. The authorities also desire to maintain greater control over China’s banking system.

In the past few months while US tech stocks have continued to do very well, Chinese tech shares have tanked.

In general, big tech stocks tend to be quite “expensive”. They are valued at high multiples of earnings (for example) but this is usually justified because those earnings grow much quicker than the average company.

We tend extrapolate the present into the future and to think the status quo will be maintained. However, is the current dominance of a small handful of stocks that unusual? A recent article from Morgan Stanley Ruchir Sharma in the FT says that perhaps it is not.

Data going back to 1970 shows companies that finished a decade in the top 10 (stocks in the S&P 500) saw median earnings gains of around 330 per cent over the course of that decade…The top 10 of the 2010s were not that different from the norm: earnings were up 350 per cent.

Given how popular US tech brands have become, it is widely forgotten that a decade ago Amazon and Facebook were not in the world’s top 100 companies by market value.

Since 1970, companies that finished a decade in the global top 10 have had a less than one in five chance of finishing the next decade there.

Indices such as the S&P 500 are market-cap weighted. The biggest stocks in the index are therefore those that have done very well in the past to become the biggest companies in their respective markets.

However, trends change. Industries go in and out of fashion, and new companies come along to change the world. Is there anything different about big tech which mean they will buck this trend and continue their dominance forever?

How well those tech stocks do going forward, will largely depend on whether they can continue to grow as quickly as they have in the past.

A recent article from US firm Compound advisers illustrates this nicely. Chart one shows the growth in revenue of Alphabet (owners of Google) and Baidu (the leading Chinese search engine) over the decade up to end of July.

Alphabet increased its revenue by an impressive 450% over that period. However, Baidu nearly doubled this at 812% growth. 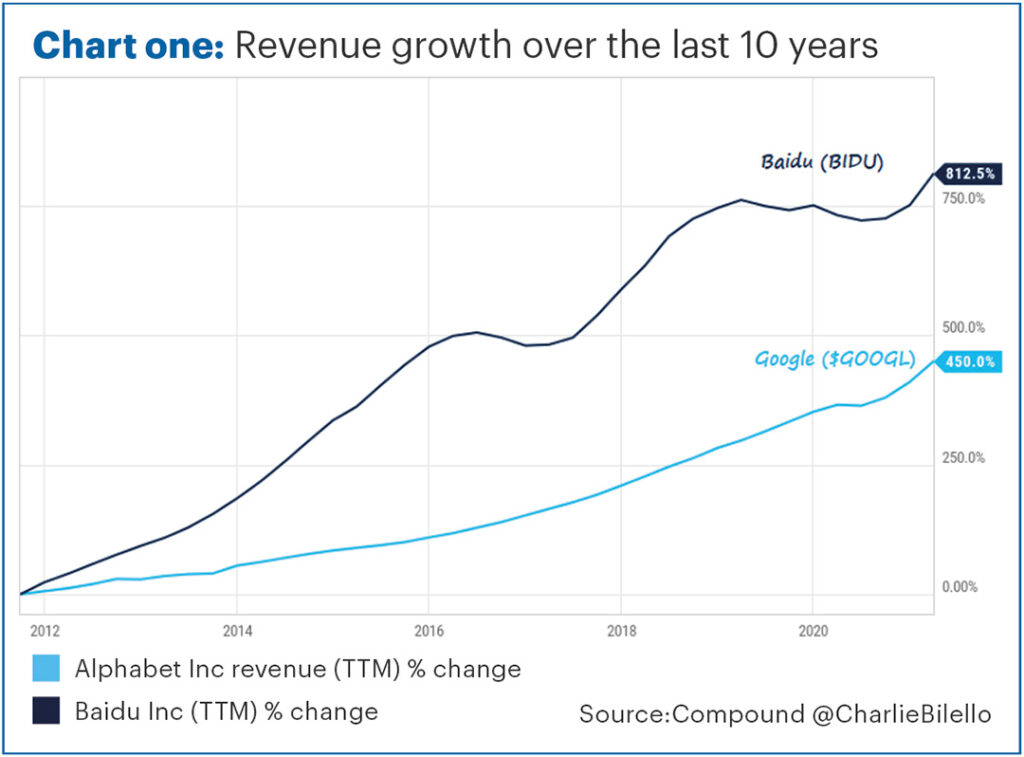 Despite this, Alphabet would have been the better investment returning 778.4%, whilst Baidu actually FELL by 3.87% as shown in Chart two. 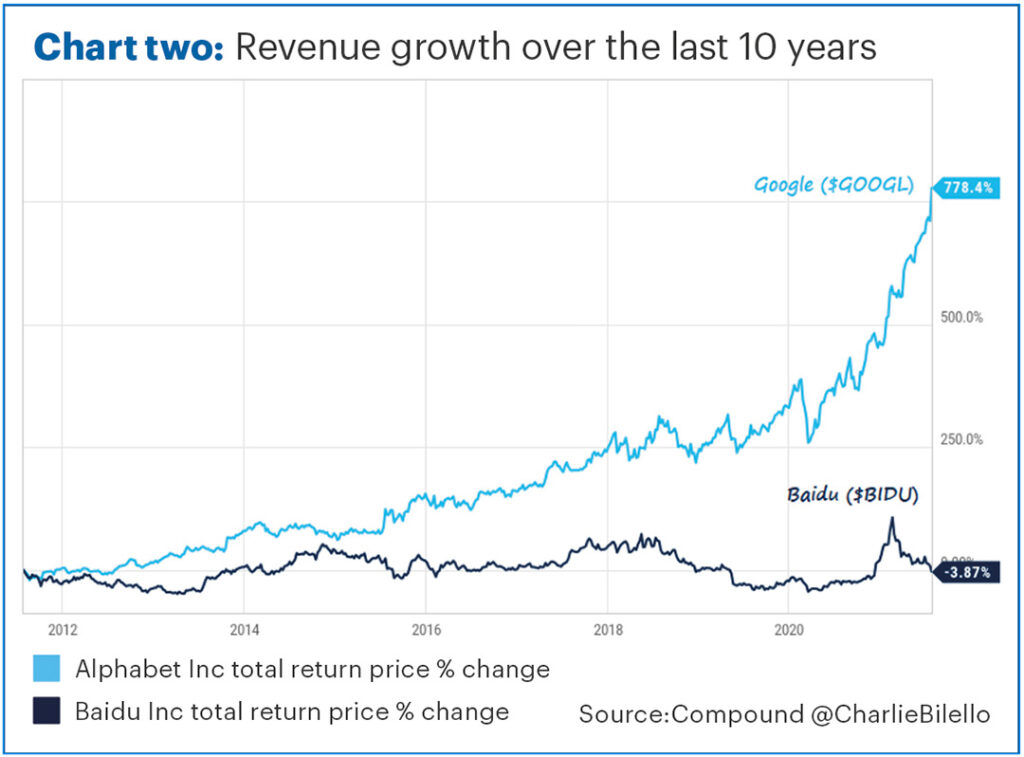 The reason for this is that Baidu was over-valued a decade ago. Its market value was 32 times its underlying sales, compared to Alphabet which traded at just 6 times sales. Baidu was just too expensive, even with the superior levels of growth.

Today, Baidu trades at just 3.2 times sales whilst Alphabet is at 9.7 times (according to Compound advisers). Over the next decade, Alphabet will need to grow more quickly than Baidu to justify the current valuation gap.

In our view, both US and Chinese tech stocks still have merits as investments, but both have significant risks too. The risks are perhaps more visible in the Chinese stocks, but they are also reflected in the price to a much greater extent than in their US counterparts. 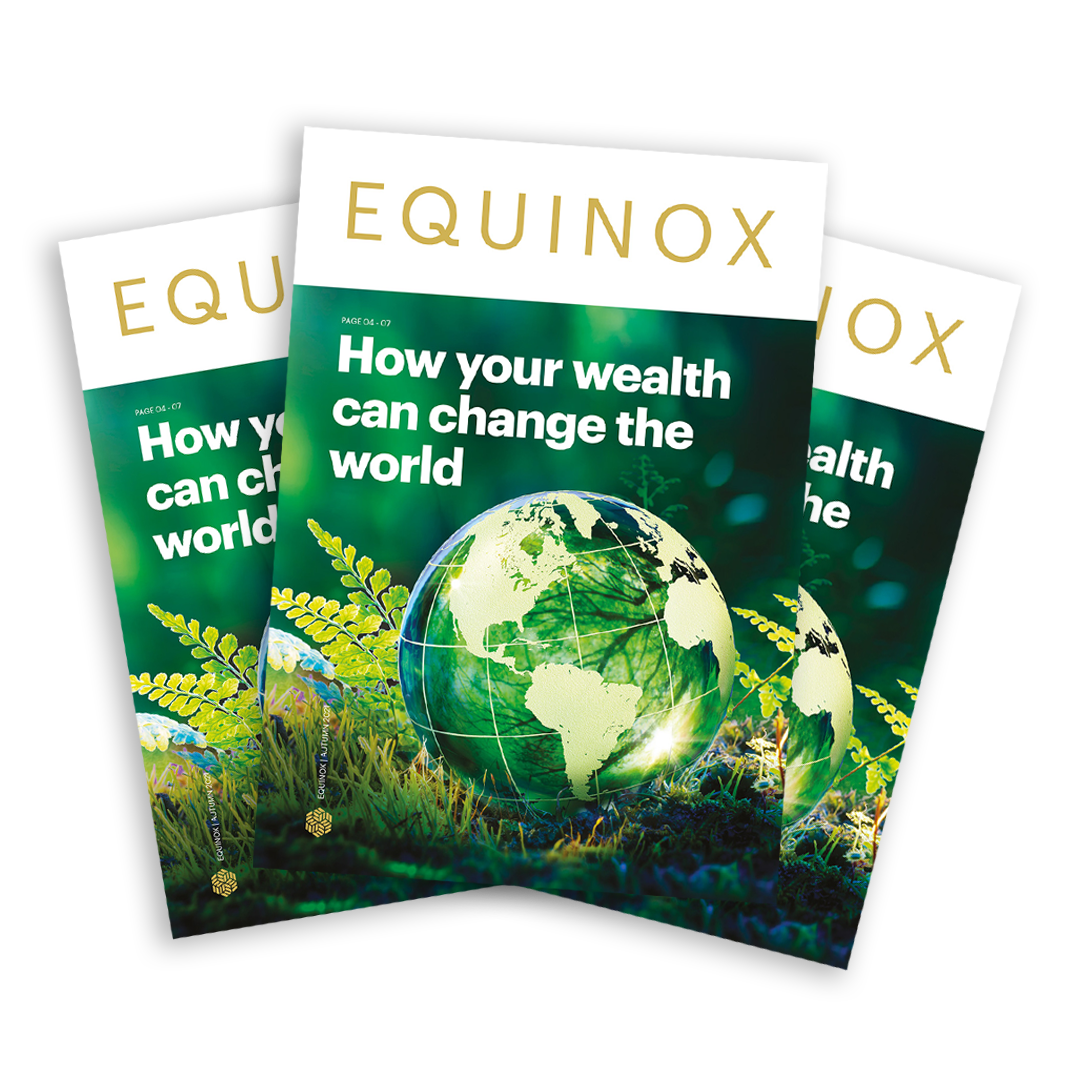 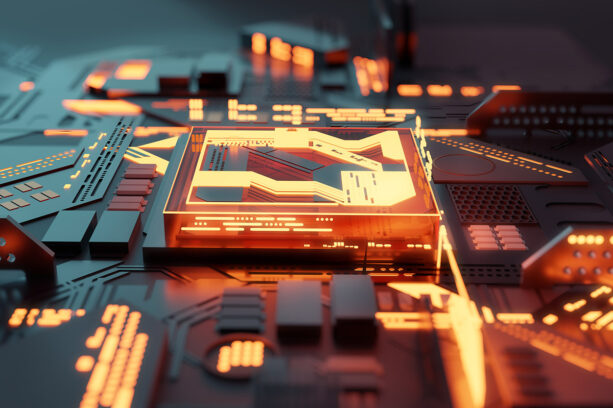 How could quantum computers change the world? Find out in Investment Analyst Neal Foundly’s latest ‘in a nutshell’ blog. 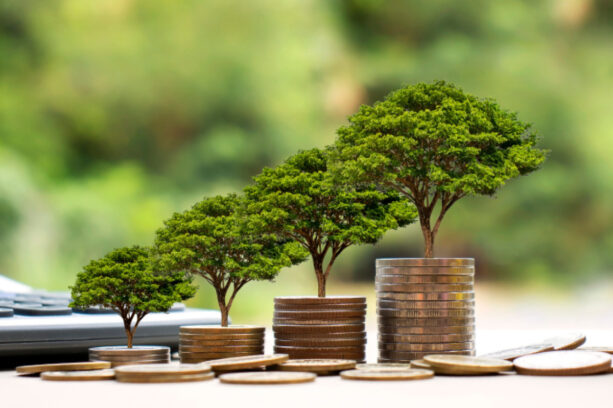 Think of a tree as a carbon sink, capturing carbon dioxide (CO2) and storing it into perpetuity. In the new world of climate change where the market pays for this service, trees look a little bit more exciting.